All the baby chicks! [Photo/Video Story] 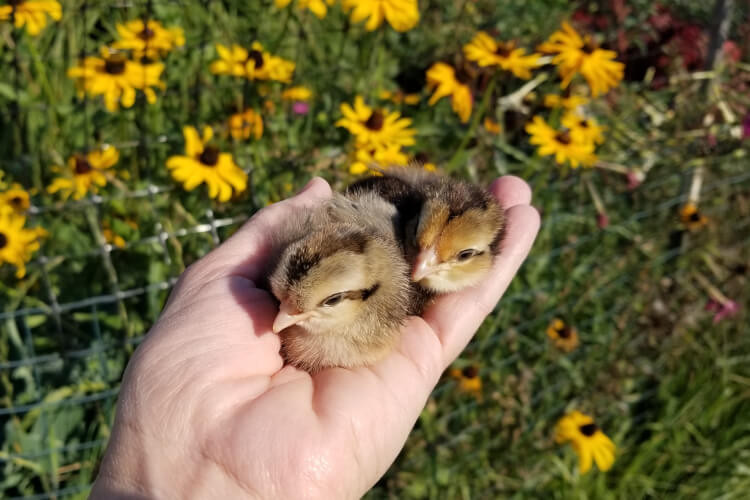 “Momma, I don’t think we can name them all!”

This is what Farmhand Vera said to me as we watched the baby chicks that we’d just got all cozied up in the new brooder.

Verbally I agreed that she was correct and assured her that it would be OK not to name them all.

Inwardly I was cracking up at what would probably end up being the understatement of the week at the Frederickson house.

You see, when we carefully dipped the beak of the last little chick in the water and then gently shooed it towards the cozy heat under the hoover, the chicks numbered 452.

Yep, she’s right. We’re not naming them all!

In fact, only two have names - Beautiful Chick (Farmhand Vera’s) and Peepy Chick (Farmhand Eli’s). These are the “house chicks” that will be our indoor companions in a cozy tub in the kitchen for a few weeks before they join the rest of the flock. 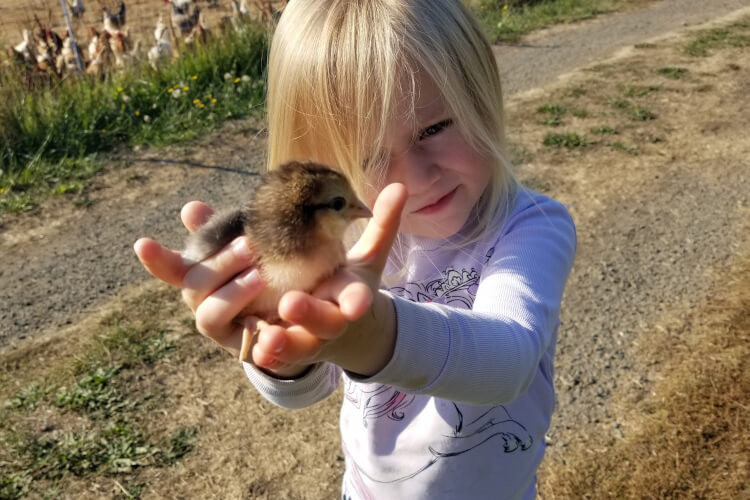 It’s actually a funny thing for Vera to say because we’ve never named ALL the chicks, but I think she was probably struck by the same feeling I was as we stood there and watched them – there are just so many of them!

(You can watch along with us in the video at the bottom of this post.)

This year we are excited to be DOUBLING our egg laying flock and providing even more tasty, beautiful eggs for all our customers.

Last year’s experiment in raising chicks through the winter rather than in the Spring was such a success that we decided to jump right in and see what we can do with a much bigger flock.

This fun, exciting, big plan has made it extra busy around here for the last few weeks as we prepared for the arrival of all these little peeps.

Martin’s had the brunt of the hard work to do but I’ve been right along behind, baby and camera in hand, and I thought you’d enjoy a little photo story showing what we’ve been up to.

The first thing you need when you double your number of chicks is a bigger brooder! A brooder is a safe, warm, dry pen for the chicks to live in until about 6 weeks old when they’re fully feathered and able to live without supplemental heat.

The brooder pen is completely predator proof. There is always something trying to get after the tiny little fluff balls!

Martin constructed a new pen of lumber and chicken wire. It's made of modular panels, like the smaller one you can see in the background of the photo, so it can be easily moved or removed, as needed. 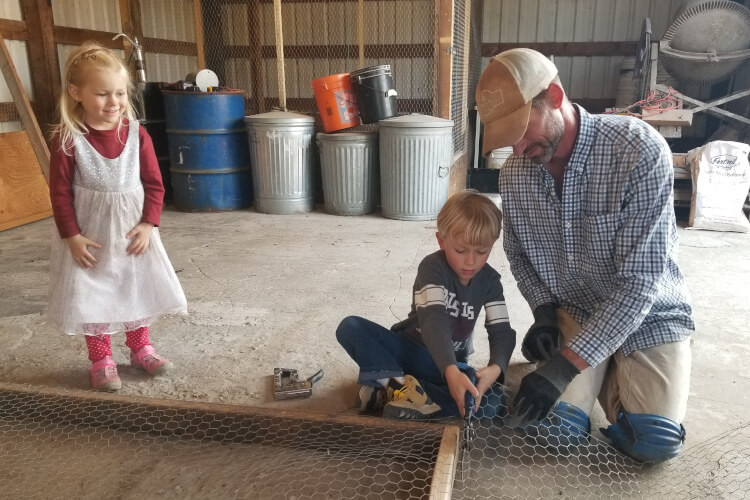 Farmhand Vera actually spent quite a lot of time helping him by handing him screws and tools. She only wore her sparkly dress for part of the construction.

Farmhand Eli did help out some- he was very excited to try cutting the chicken wire all by himself – but he’s been too busy making decorations for Halloween to have much time to spare for construction.

We also needed to construct a second “hover,” which is the contraption that performs the job of a mother hen.

Basically the hover is an upside down box on short legs with heat lamps inside the box, which provides a cozy warm place for the babies to run under and get warm. Then, just like if they were with a momma hen, when they’re hungry or thirsty they zip out from under the hover, get a drink and a snack, and zip back under to warm up again. 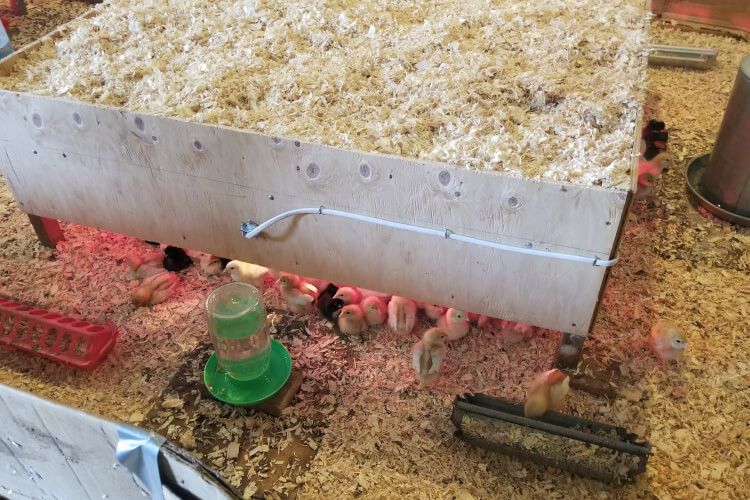 There is a lot of adorable scurrying!

So, when you have the brooder built with the hovers in place, it’s time for baby chicks!

I keep a breeding flock of the hens that lay the colorful blue, celadon and olive eggs, so these chicks we hatch ourselves. These are mostly Cream Legbar and a few crossed with Welsummer and Black Copper Maran.

The kids help me turn the eggs three times every day for nearly three weeks in our tabletop incubators and then we all spend most of hatching day watching the hatch through the windows on the top of the incubators.

When the chicks are all hatched and fluffy, it’s time for them to make the trek out to the brooder with a tub full of peepy chicks. 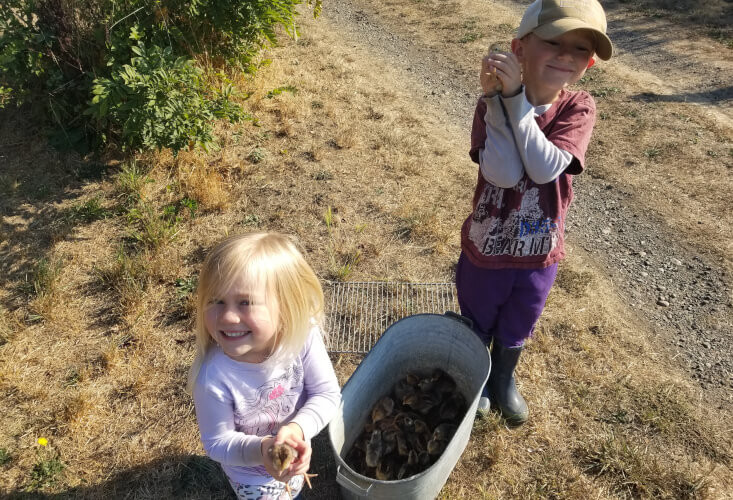 It was such a gorgeous sunny day we had to stop and play with them for a bit.

The kids and I love the hatching process, but I am not in a position to be hatching 450 chicks! So we also order chicks from a hatchery.

It’s going to be such a colorful flock, as well as a beautifully diverse mix in the cartons! This year we will have Golden Sexlinks (medium brown eggs), Leghorns (white eggs), Marans (dark brown eggs), and Barred Rocks (light brown/cream eggs).

Hatchery chicks are delivered to you via USPS. Let me tell you, the postal workers are pretty happy for you to pick the chicks up FIRST THING in the morning. That many chicks make quite a racket!!

Farmhand Vera was so excited to go on the trip to get the chicks from the post office. One of her favorite traditions, which I started with Farmhand Eli years ago, is getting to hold a chick on the way home.

Here she is with all the boxes of chicks and the one to snuggle. 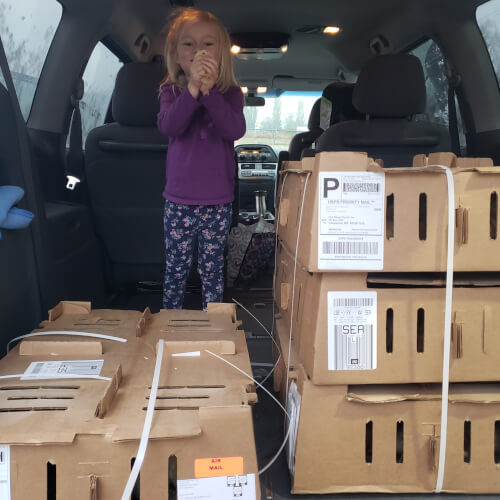 Once they’re back to the farm, the work of settling them into their new home begins.

To help them get oriented, we dip their beak into the water and then set them under the hover. It only takes showing them once for them to remember where to find warmth and water. The food they find on their own. 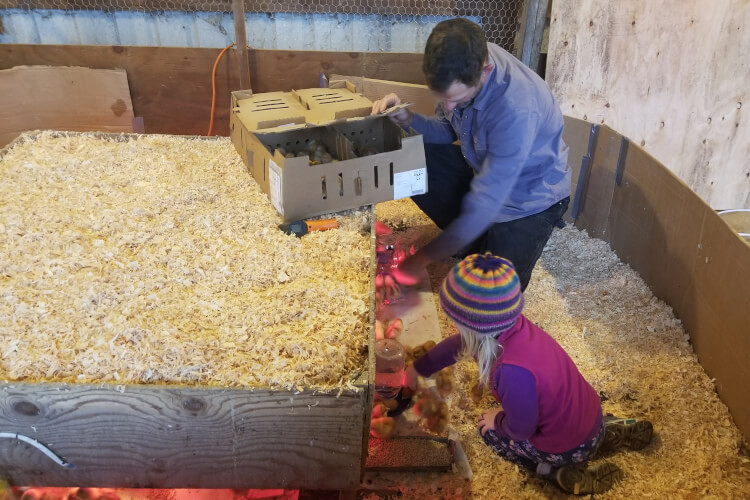 And we don’t have to dip the beaks of every single one of the 450 chicks. We do this for quite a few and the others learn from them – chicks are pretty fast learners.

Here’s all the chicks under the two hovers. Because they’re so tiny we don’t want them to wander too far from the heat and get “lost” in the big brooder, so we build a little fence around them of cardboard. In just a few days we’ll remove the cardboard and they’ll have the run of the place. 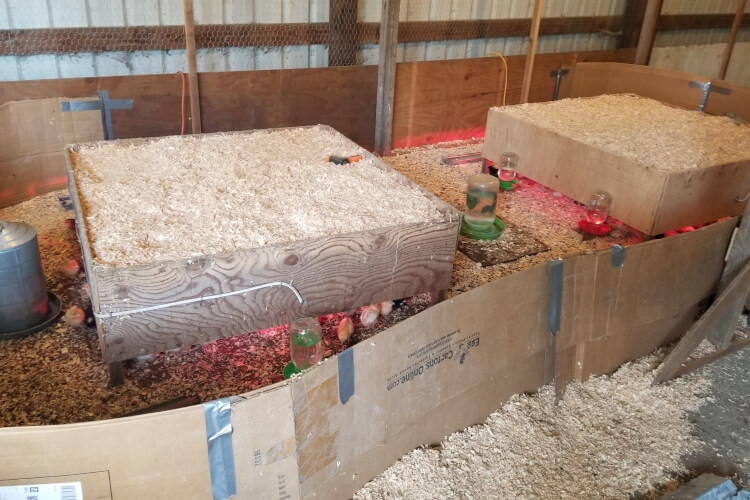 Chick time only comes once a year, but we all enjoy the sweet little babies and their cheeping.

Even Farmhand-In-Training Baby Grace, 9 months old this last Monday, has really been enjoying the chicks.

She can watch the house chicks in their tub while simultaneously chewing on the side of the tub and soothing her new teeth. Two birds with one stone, right there! Hahaha. 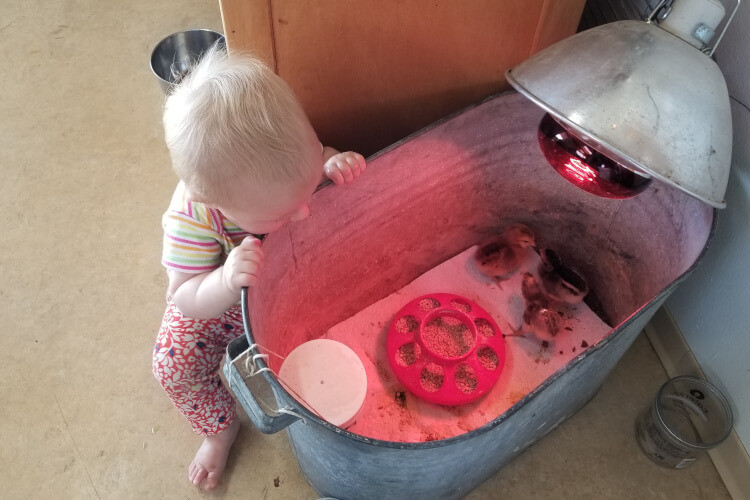 And finally, a quick video clip, just as if you were sitting inside the brooder, watching the scurrying and listening to the happy little peeps.

The metallic squeaking sound you here in the background is one of the feeders - sounds like it needs a little WD-40 on the hinge!

It’s hard to believe these little cuties will be laying cartons full of lovely eggs in the Spring!

How to roast bacon in the oven (Recipe) 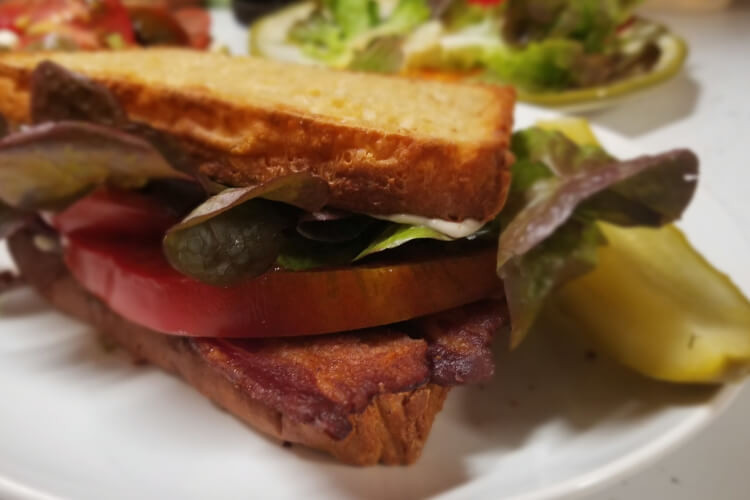 Chicken Chatter – a glimpse into everyday life on the farm. [Video] 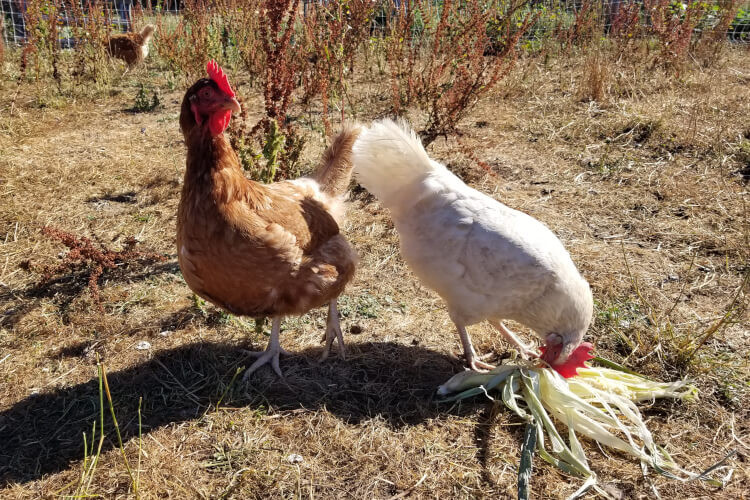 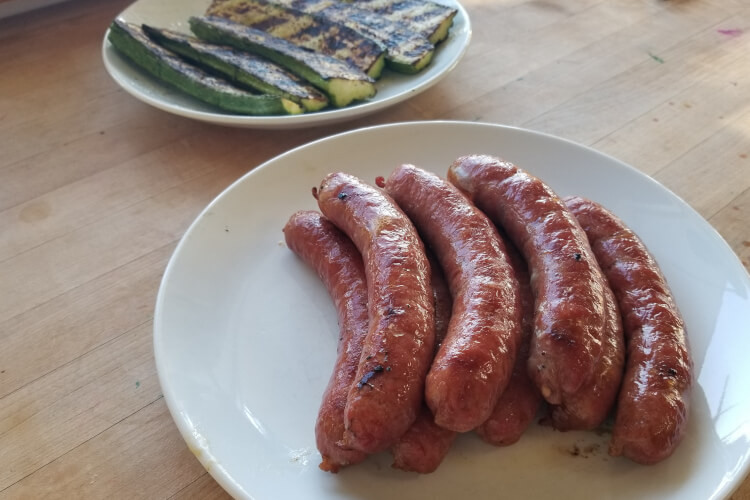